I am now in the 4th stage of my career.  This post begins a series on these stages, with some insights I have gained along the way.  Stage  I (below) was my “heavy-duty” period.

The struggle of manufacturers during this deep recession to get support from banks for investments in new technology and capital improvements reminds me of the challenges of the first stage in my career.

One of the toughest industrial marketing communication assignments is the job of trying to get top management to consider investing in new manufacturing capital equipment.  In the 1980s and early 1990s, it was my mission, my daily toil. I did it for a dozen and half different companies who engineered and built robotic cells, lasers, controls and all kinds of bizarre-looking automation.  These companies had to succinctly demonstrate the ROI of their systems to their market, which was the manufacturing industry, or else shrivel up  as just another “clever idea.” 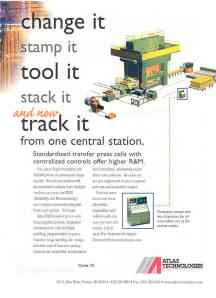 The trick on the front end of the sales cycle was to promote these technologies with messages that would actually get noticed and absorbed. The recipe was a mixture of persuasiveness, tersely-stated bottom-line benefits, and creative clarification of how the improved process / technology worked. The audience was extremely skeptical.  We were asking these potential customers to consider risking millions of dollars, or tens of millions, based on our claims.

Case studies were big, and this put me in the thick of things – crawling around violently-noisy machine tools, climbing high into towers of automation, getting intimate with lightening-fast assembly systems – all to get accompanying images, and also to get a real feel for the technology in use.  I talked regularly with production supervisors, engineering management and mahogany-row execs.  Being in the trenches was fascinating and at times, extremely strenuous.  I’ve been yelled at by shop union stewards, and spent evenings scouring dense process charts.

What was being made by the industries served? Airplanes, appliances, sporting goods, cars and trucks, computer products and telecommunications widgets, padlocks, Barbie Dolls, even breakfast cakes.  I worked for some software and integration companies also.

We would rifle-shot our ammunition on more than one battlefield. The channels were simpler then – primarily business and trade publications, supplemented by targeted direct mail. Content was the key.

Most promotional information that is spewed from companies with a complex technical offering is in one of two categories: it either consists of large quantities of engineering detail that can’t be deciphered by top management, or it goes in the opposite direction – it’s AdSpeak fluff that bores and/or patronizes the reader.

We designed outreach programs that avoided both mistakes. I learned how to write and produce brief, meaningful content that clarifies a compelling value proposition, and included enough concisely-stated substantiation to be credible to a CEO.

Messaging was on three levels:

1)      Brief, poignant and ROI-oriented messages for the highest-echelon execs

3)      Video programs for production supervisors and process engineers…seeing it at work increased their comfort level with the technology.

It’s some of the hardest work I’ve done.  For the target audience, there’s scarce capital and valuable floor space at stake.  Persistence was essential – most of these programs were multi-year, and several were between 5 and 10 years in duration.  Staying on message was a priority, yet we had to constantly find fresh ways to say it and to disseminate it.

I have applied many of these skills to describing and promoting IT systems in recent years. Most importantly, I learned a lot about a number of industries and what makes them tick.

One thought on “ B2B Marketer’s Challenge: Cutting Through the Clutter to Persuade Top Management ”